July 14, 2020
Update Required To play the media you will need to either update your browser to a recent version or update your Flash plugin.
Podcast Free MP3

God is described in the Bible as implementing truth at the same time as mercy over and over again. Without mercy, truth becomes too difficult to grasp, and without truth, mercy allows for too much freedom. In the same way that God pairs both, we must do the same when dealing with others. 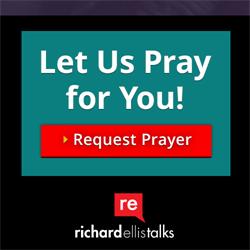 Let Us Pray For You!
We're not meant to go through our challenges of life alone, so we'd love to pray for you! Go to our Prayer Wall and click on "About Prayer"
Learn More
Contact Cancel
P.O.W.
July 13, 2020
Abort Retry Ignore Fail
July 12, 2020
Solo Cup
July 10, 2020
More Episodes
Stay Connected with your favorite Ministry Newsletters and Devotionals
More Newsletters
Sign Up
In addition to your newsletter(s), you will receive email updates and special offers from Oneplace.com.
Privacy Policy / Terms of Use
Listen to Richard Ellis Talks
on Amazon Echo and Google Home
LEARN HOW