From the MLJ Archive

Dead to Sin; Alive to God

October 11, 2020
Update Required To play the media you will need to either update your browser to a recent version or update your Flash plugin.
Podcast Free MP3

Romans 6:12-14 - Let not sin therefore reign in your mortal body. Doctrine is always something to be applied; not to only be considered. In this sermon on Romans 6:12-14, Dr. Martyn Lloyd-Jones divides Christians into two groups based on interest in doctrine verses practical matters. Is Christian doctrine simply an intellectual hobby? What is the distinction between us and our “mortal body”? Look at the connection between mortality and corruption. Sin remains in our bodies, and if it is not kept in check, then it will reign in our bodies. Sin is not dead, but we must remain dead to sin. Yield your members as slaves to righteousness and holiness! Do not allow sin to reign, for God provides a way out! “Sanctification is not a gift to be received.” Listen as Dr. Lloyd-Jones give this exhortation. We are called, not to a sudden deliverance, but to a life of sanctification. Do you long to be holy? We must understand this doctrine and continually remind ourselves of it. It is the truth that sanctifies us and makes us free! “It is God’s purpose to make us holy and He is working in us.” Resist the devil and he will indeed flee from you!

Featured Resources From From the MLJ Archive 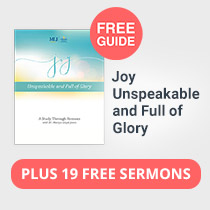 Your new free guide includes 19 complimentary sermons like: Not Ashamed of the Gospel, Standing in Grace, Glory in Tribulation, Glorying in God, Dead to Sin; Alive to God, Mind; Heart and Will, Life in the Spirit, Faith and Joy, Real Christianity? - the Test, and At Peace With God. 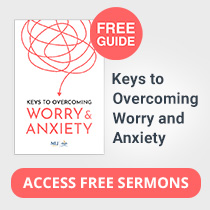 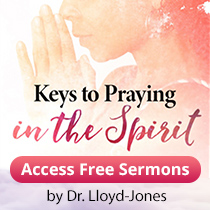 Enjoy 10 Complimentary Sermons on Praying in the Spirit from Dr. Martyn Lloyd-Jones 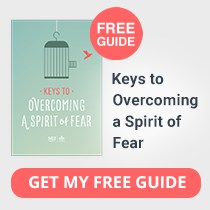 FREE GUIDE: Keys to Overcoming a Spirit of Fear
Contact Devotionals Cancel
Dead to Sin; Alive to God
October 4, 2020
Free in Christ Jesus
September 27, 2020
No More in Realm of Sin and Death
September 20, 2020
More Episodes
Listen to From the MLJ Archive
on Amazon Echo and Google Home
LEARN HOW

About From the MLJ Archive

From the MLJ Archive is the Oneplace.com hosted ministry of the MLJ Trust.  Our mission is to promulgate the audio ministry of Dr. Martyn Lloyd-Jones.

Dr. Martyn Lloyd-Jones (1899–1981) has been described as "a great pillar of the 20th century Evangelical Church". Born in Wales, and educated in London, he was a brilliant student who embarked upon a short, but successful, career as a medical doctor at the famous St Bartholemew's Hospital. However, the call of Gospel ministry was so strong that he left medicine in order to become minister of a mission hall in Port Talbot, South Wales. Eventually he was called to Westminster Chapel in London, where thousands flocked to hear his "full-blooded" Gospel preaching, described by one hearer as "logic on fire". With some 1600 of his sermons recorded and digitally restored, this has left a legacy which is now available for the blessing of another generation of Christians around the world — "Though being dead he still speaks".

Contact From the MLJ Archive with Dr. Martyn Lloyd-Jones